V's Ever After Style

Sorry I didn't post V's Christmas Hair do before Christmas.  But I didn't put it in until Thursday and then I decided to spend Christmas Eve day playing with my kids (and wrapping presents!) 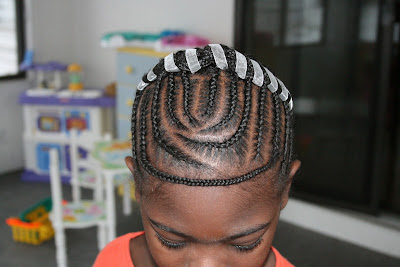 I titled this one "The Ever After" style because I was inspired a few weeks ago when watching the movie by the same name.  You know, that grown up version of Cinderella with Drew Barrymore???  Well, there are a lot of braids in that movie.  I love movies set in that time, the clothes and hair are SO cool!  Anyway, I tried to take some step by step pics while putting in the style so that I could share it with you, but I am not sure if I took enough pics of the different steps.  I will try to explain:

Step 1:
Put in a Ear to Ear part.  I didn't do mine very far back because I knew I was going to be doing that braided headband.

Step 2:
Put the hair in the back of the head into a braid to keep it out of the way.  Then part out a section of the front middle.  Then put in approximately 6 cornrows going from the forehead to the part line.  I made mine curve a bit in the front for extra visual effect, but this is not necessary. 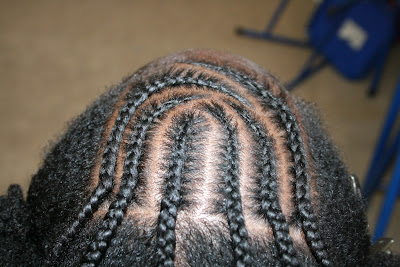 Step 3:
Part off hair on either side of this middle so that you will be adding a cornrow of the same size to BOTH sides of what you have already done.  (When I did this I realized that I had not actually gotten my middle section very centered.  So I first ended up having to add another row to the right side to even things up a bit.  You can see I know have 7 cornrows for my middle.)  THIS PICTURE SHOWS THE ROW I HAD TO ADD  - NOT THE HAIR I PARTED OFF ON EITHER SIDE 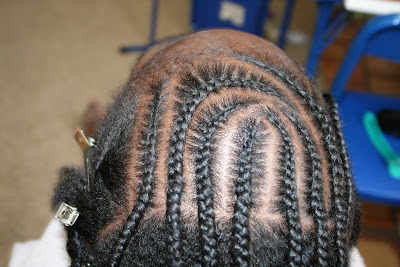 Step 4:
Starting on the right - begin your cornrow at the PART LINE (instead of the forehead) and row all the way to the forehead.  Then keep braiding all the way to the end of the hair.  You will now have one cornrow going the opposite direction of the others with a braid hanging down the side of her face.
Step 5:
Take the tail end of that braid and loop it across the forehead.  Now take the hair that you sectioned off on the left side of the middle and begin to cornrow it normally from the forehead going back to the part line.  EXCEPT that when you begin this row, use the tail end of the braid that you looped across the forehead as the 3rd strand of the braid.  On V, the hair was just long enough to reach, so that tail end was only part of the very beginning of this cornrow.  (GOSH, that sounds confusing!  Hope you get it!) 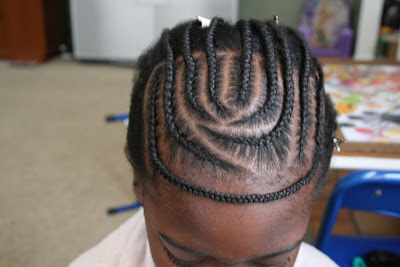 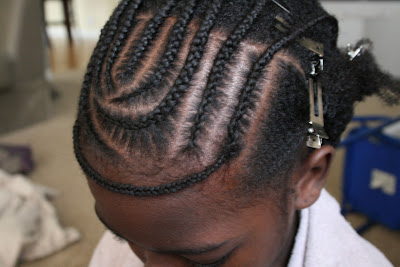 Step 6:
Add 2 or 3 more cornrows on either side with the hair that is still left above the ears.

Step 7:
Make another ear to ear part about an inch or less behind the first one.  Divide this into a row of box braids. You will need these to make the braided headband. 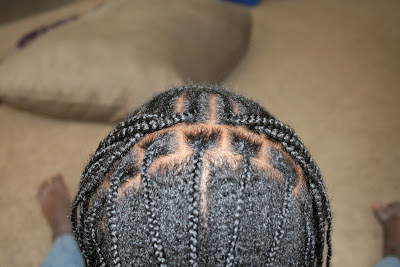 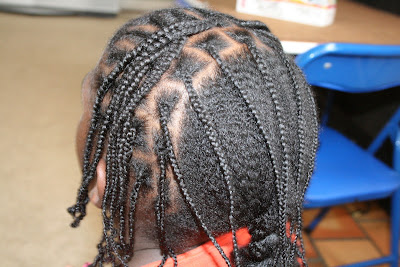 Step 8:
Starting on the left use the braids from the cornrows AND the second row of braids and make a cornrow from the ear to the MIDDLE of the head.  (Just like how I braid together the braids for The Braided Crown.)  When you get to the middle of the head, stop adding more braids and just braid the hair that you have all the way to the ends.
Step 9:
Repeat on the right side.
Step 10:
Now cross one of the braids over the other and lay both of the ends of the braids down behind the first ones.
Step 11:
Take the tail of the braid on either side and weave it under and around the braids in front of it to keep them in place. 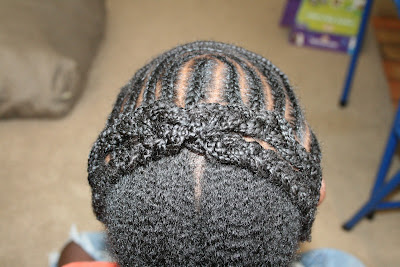 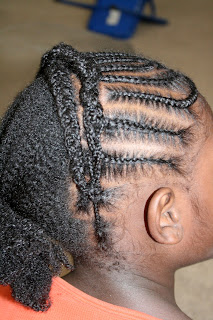 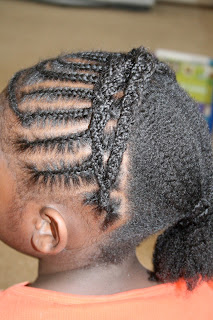 Step 12:
Put box twists in the back section. 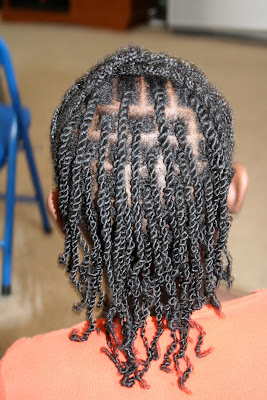 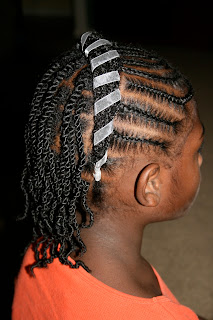 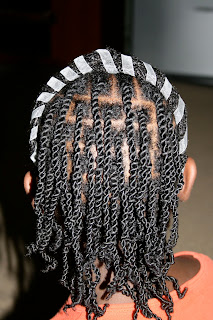 WHEW!  That's it!  I am not sure that I am cut out for this photo/written description stuff!  That is why I started making videos years ago.  So much easier!  Anyway, if you like this style, I hope that you can decipher this.  Feel free to ask questions!  Here are a few more pics of the finished style: 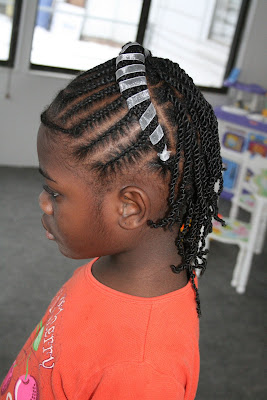 Lastly, a family pic from yesterday.  I hope you all had as lovely of a Christmas day as we did! 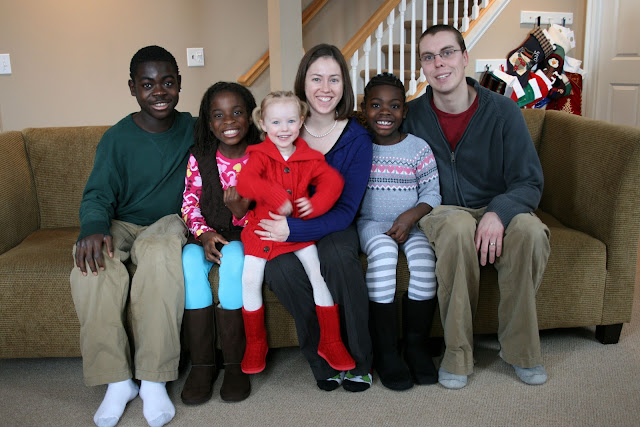 Katie
Posted by Katie and Steph at 2:48 PM

We love your comments, so please share your thoughts with us! We do moderate all comments on this blog, so you might need to wait a few hours or a day to see your comment show up! We also have disallowed anonymous comments. We are just getting way too much spam.

Katie and Steph
We are two moms of five amazing kids. We hail from Michigan and California, respectively. We love doing hair and want to share!

Your Source for Hair Bling!